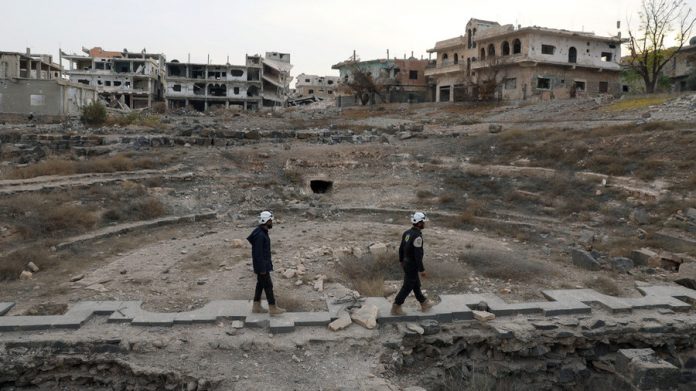 Eva Bartlett is a Canadian independent journalist and activist. She has spent years on the ground covering conflict zones in the Middle East, especially in Syria and Palestine (where she lived for nearly four years). Follow her on Twitter @EvaKBartlett

Did Canadians get to vote on whether or not to bring potential terrorists or supporters of terrorists to Canada? No. Will Canadians get a say in where these potentially dangerous men will be settled? Highly unlikely.

Ninety-eight members of the White Helmets, and a few hundred of their families, were evacuated by Israel and allies to Jordan late in evening of July 21. They will seemingly be shipped off to a few Western nations for resettlement: Canada, the UK, and Germany. So far, Canada has pledged to take 50 White Helmets and around 200 family members.

Packaged as neutral, heroic, volunteer rescuers, who have “saved 115,000 lives”, according to White Helmets leader Raed Al Saleh, they are in reality a massively Western-funded organization with salaried volunteers, and have no documentation of those 115,000 saved. They contain numerous members who have participated in or supported criminal acts in Syria, including torture, assassinations, beheading, and kidnapping of civilians, as well as inciting Western military intervention in Syria.

James LeMesurier, a former member of the British military who founded the White Helmets, did so in countries neighbouring Syria: in Turkey and Jordan. They have since worked solely in terrorist-held areas of Syria, and according to Syrian civilians in eastern Ghouta, they worked directly with, or were themselves, extremists of Jaysh al-Islam or other extremist groups. Civilians in east Aleppo said that White Helmets worked with al-Qaeda in Syria (the Nusra Front).

The fact that White Helmets centres are frequently, if not always, found near or next to headquarters of al-Qaeda and other terrorist factions further supports the accusations that they collaborate with terrorists—even with ISIS, as noted by ISIS hostage John Cantlie. He described the White helmets as an “ISIS fire brigade“.

White Helmets members were present to welcome Saudi terrorist Abdullah al-Muhaysini, leader of al-Nusra (al-Qaeda in Syria) who the US government designated a terrorist for “acting for or on behalf of” al-Nusra, and helping to finance them.

Over sixty White Helmets members have clear ties to terrorist and extremist groups, as shown by their own social media accounts and videos. In many of their own photos they hold weapons. Some White Helmets members have called for the murders of Shia villagers in Idlib governorate, and were instrumental in the massacre and injury of over 300 villagers, including 116 children in April 2017.

Not exactly neutral and members of the Daraa batch of White Helmets could very possibly be among those soon to be en route to Western nations.

In September 2014, independent Canadian journalist Cory Morningstar wrote about the New York City PR firm, Purpose Inc, and its propaganda role regarding the White Helmets. In March and April 2015, independent US journalist Rick Sterling, further scrutinized the White Helmets and related “humanitarian” groups serving to call for a no-fly-zone in Syria.

Since then, and for years now, concerned journalists and commentators have written or posed questions on the entity known as the White Helmets. In addition to the years-long investigations by Vanessa Beeley, commentators – from former British ambassador to Syria Peter Ford, award-winning US journalist Gareth Porter, award-winning journalist John Pilger, and even rock legend Roger Waters, have noted that the White Helmets are a dangerous and fraudulent group, or as Pilger put it, a propaganda construct.

In the case of the Atlantic Council’s Ben Nimmo, his tweet on the lack of or scant mention by RT or Sputnik in 2014, 2015, to mid 2016 of the White Helmets supports my argument: those are precisely the times when the above-mentioned independent journalists were investigating the group.

White Helmets next to terrorists’ headquarters

In Syria, I saw two different White Helmets centres in close proximity to terrorists’ headquarters: one in eastern Aleppo, and one in Saqba, eastern Ghouta. The Saqba centre was two hundred metres from a factory extremists used to manufacture mortars and missiles, quite possibly those used to bomb civilians in Damascus. It contained a fire-truck stolen from the real Syrian Civil Defense, as well as ambulances and vehicles all torched when the White Helmets left Ghouta with terrorists of Jaysh al-Islam and Faylaq al-Rahman, among others. They were all safely transported to Idlib as per the deal with the Syrian government.

The other White Helmets centre I saw was in the Ansari district of Aleppo’s east. Formerly a school (and now returned to this status), this centre was a half minute’s walk to the headquarters of al-Qaeda in Syria, as well as the Abu Amara Brigades, and other extremists.

Vanessa Beeley, who had previously been to Ansari, wrote a detailed article additionally noting that just 200 metres from that same White Helmets centre was Al Mashad Square, where 12-year-old Palestinian youth, Abdullah Issa, was savagely tortured and then slowly beheaded.

In the Old City, next to Aleppo’s citadel last May, I spoke with an older man who had remained in Aleppo during the terrorists’ rule. He told me: “The Civil Defence is supposed to rescue people, but they used to steal women’s earrings from their dead bodies. If she was wearing gold, they’d cut her hand to steal it. They are thieves, not rescuers. We saw them murdering people, many times.”

He spoke of them staging rescue scenes: “They’d start filming and claiming that SAA hit this area, it was in front of our eyes, and we knew it was all staged, but we didn’t dare to stand against them because they would kill us, they would empty their gun in you immediately.”

Who killed the civilians in White Helmets Douma videos?

It was the White Helmets who released (WARNING: EXTREMELY GRAPHIC) videos and photos alleging a chemical attack in Douma in April 2018. Yet, no civilian among the many I met in Douma believed there had been a chemical attack and medical staff didn’t see patients exposed to a chemical agent. More recently, the OPCW ruled out the use of a nerve agent used in Douma, finding only traces of “chlorinated organic chemicals”.

So, who and what killed the women and children shown in the White Helmets-distributed video from Douma? Did the White Helmets take part in their murder, or merely film their bodies (some arranged) after the fact?

Corporate media has diligently avoided asking a single honest question of the propaganda group they laud, and has for years attacked those of us who do ask questions and take testimonies of Syrian civilians on this matter.

Canada has been assisting the White Helmets for some years now, under the pretext of aiding humanitarians. While the full extent of Canadian financial support to the White Helmets has yet to be revealed, at least Can$7.5 million (US$5.7mn) was given to the group, helping with “the development and expansion of early warning air raid systems.”

Following the Israeli evacuation of White Helmets and their families from southern Syria, Global Affairs Canada released a statement by Minister of Foreign Affairs, Chrystia Freeland, on the “courageous volunteers”, regurgitating the White Helmets “save the innocent and the wounded” unsubstantiated claim.

Unsubstantiated because, in spite of the fancy videos, neither the White Helmets nor its UK backers can provide a list of the supposed over 115,000 civilians rescued.

While the media has lauded Canada’s role in the evacuation of the White Helmets members, it’s worth noting the person, Robin Wettlaufer, behind this evacuation effort. Wettlaufer met with White Helmet leader Raed Saleh (once denied entry to the US due to his potential ties to extremists, according to Mark Toner) in late June, as the Syrian army was regaining territory in Daraa governorate.

Wettlaufer has held the Istanbul-based position of Special Representative for Syria, under  Global Affairs Canada, from March 2014 to present, according to her LinkedIn page.

In fact, she is the Special Representative to the Syrian Opposition, something noted in a December 2016 Global Affairs Canada video featuring Wettlaufer.

Given that Wettlaufer is thus Canada’s Representative to extremists in Syria, her key role in instigating the evacuation of the White Helmets is hardly surprising, let alone praise-worthy. But it should be worrying to Canadians. Did Canadians get to vote on whether or not to bring potential terrorists or supporters of terrorists to Canada? No. No vote in the Parliament, no public discussion. Will Canadians get a say in where these potentially dangerous men will be settled? No sign of that so far, and indeed highly unlikely.

Why did the Canadian government refuse the entry of 100 injured Palestinian children from Gaza in 2014, a truly humanitarian effort, and yet will fast-track the entry of potentially dangerous men with potential ties to terrorists?

As for the claims of danger to the White Helmets in southern Syria, their comrades in eastern Aleppo and in eastern Ghouta were safely transported out of those areas, along with their families and with extremists who refused to take amnesty, while Aleppo and eastern Ghouta had peace restored. The White Helmets are potential security threats to citizens in the Western nations planning on hosting them.

As citizens privy to all this information and all the questions on the White Helmets, we must demand our governments reverse this plan, or at least provide us with confirmation that the immigrants in question have been fully investigated and have not been involved in terrorist activities in Syria in any way.

The statements, views and opinions expressed in this column are solely those of the author and do not necessarily represent those of RT. to bring White Helmets to Canada dangerous and criminal/By Eva Bartlett, August 10, 2018/RT – Mark Taliano
— Read on www.marktaliano.net/decision-to-bring-white-helmets-to-canada-dangerous-and-criminal-by-eva-bartlett-august-10-2018-rt/